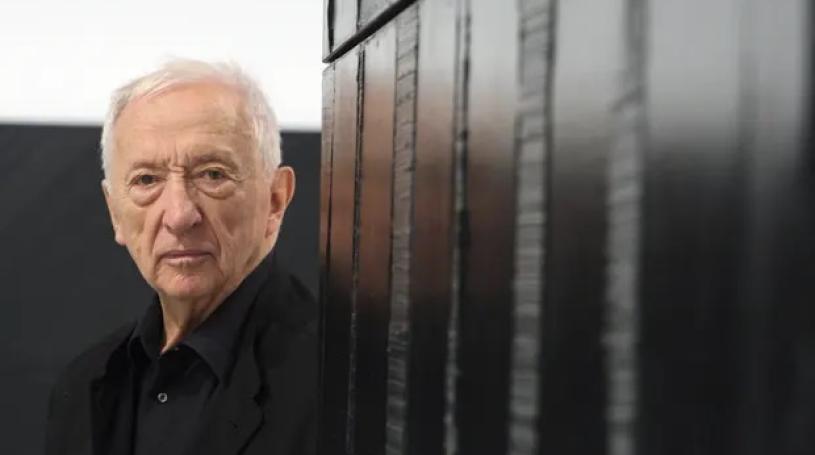 The French abstract painter Pierre Soulages, who has died aged 102, turned black into an obsession, transforming it from the absence of light into a colour in its own right. On the floor of his Left Bank studio in Paris, he produced large, shiny canvases flooded with black – or what he described as outrenoir or “beyond black”. With specially prepared brushes, palette knives and domestic implements, Soulages created complex textures, combining areas of smoothness and roughness and digging deep lines into the thick, layered paint.

For Soulages the tactile values in his paintings, as well as his related abstract bronze reliefs, were not as important as the ways in which the surfaces absorbed or reflected light. These effects were extremely attractive to collectors and the wider public alike. Although Soulages claimed to be astonished by this popularity, it is perhaps not hard to explain. Black never goes out of fashion – and no fine artist in history better understood the importance of choosing the right finish, matt or gloss.

Soulages was always an elegant figure, dressed in clothes as dark as his painting, but for him noir was not merely an accessory. He told the story that as a child of six he was found drawing thick lines with a brush and black ink. When asked what he was making, he replied: “Snow.”

This fascination with black and its luminous potential led him in later life to create some remarkable juxtapositions. At the turn of the 21st century he used collage to make a series of compositions consisting of horizontal black and white strips. The optical brilliance was striking even when the explosions of black paint seemed to overwhelm the swathes of white.

The normal duality of light and dark was subverted in 2012-13 when he exhibited two works, one black and one white, first at the Musée des Beaux-Arts in Lyon and then at the Villa Medici in Rome. The black surface of one canvas was lit up by white lines, while the ridges of paint in the neighbouring picture cast delicate shadows on to the whiteness.

Soulages also on occasion introduced primary colours, though the effect was not exactly uplifting. Early in his career angry reds appeared in the otherwise black Etching No 2 (1952), which is in the Tate collection, and sombre blues merge into the blackness of some of his late works. As ever, their titles, such as Painting 81 x 130 cm, 26 April 2002 (in the Museum Liaunig, Neuhaus), allow the viewer a free rein in interpretation.

The moments of colour were striking but brief. Totally black canvases were the keynote of Soulages’ career. As he put it in 2005: “Before light, the world and things were in the most complete obscurity. With light the colours were born. Black is anterior to them. Anterior also for each of us, before birth, ‘before having seen the day’. These notions of origin are buried deep inside us.”

Soulages was born in Rodez in the Aveyron district of southern France. Although later he was associated with the coastal area of Montpellier and Sète in Languedoc-Roussillon where he had a summer studio, he was profoundly affected by his youth in the Aveyron. He was especially impressed as a child by the area’s menhirs, which he saw at the Musée Fenaille, and Romanesque churches, whose influence could later be seen in his austere, relief-like paintings.

Like his sister, Antoinette, Pierre overcame early setbacks, above all the death when he was five of his father, Amans, just after he had opened a hunting and fishing shop on the ground floor of the family home. Antoinette, who was 15 years older than her brother, became a teacher of philosophy, and although his mother, Aglaé, wanted him to be a doctor, Pierre single-mindedly pursued an aristic career.

In 1938 Soulages went to Paris, where he joined the teaching studio of René Jaudon. After seeing exhibitions of Cézanne and Picasso, he decided to abandon his place at the École des Beaux-Arts and return home. He was mobilised in 1940, before working as a farmer near Montpellier and attending the city’s art school, where he met Colette Llaurens, whom he married in 1942.

Soulages quickly resumed his career at the end of the war and, on moving back to Paris in 1946, threw himself into the vanguard of expressive abstraction. In 1947 he participated in a show in Paris at the Salon des Surindépendants. This was a period of renewed international cooperation, and Soulages exhibited as early as 1948 in Stuttgart and two years later at the Gimpel Fils gallery in London.

From the outset he had important contacts with British artists, notably Patrick Heron – a relationship that featured in a 2016 show at the Waddington Custot gallery in London.

It was the US, however, that exerted the strongest influence. At this stage Soulages was creating bold black strokes on light backgrounds, inviting comparison with Franz Kline, although his style was actually more delicate and calligraphic. From his first exhibition at the Betty Parsons gallery in New York in 1949, Soulages was a hit with American collectors and major museums. This golden period lasted throughout the 50s and into the 60s until his American dealer, Samuel M Kootz, closed his gallery in 1966. With the rise of pop art and other trends, abstraction fell out of favour.

Outside the US, Soulages’ success continued unabated in the 60s and 70s. His projects ranged from a stained glass piece of 1965-66 for the Suermondt-Ludwig Museum in Aachen, which has been described as an “icon of the night”, to an exhibition in Dakar (1974) praised for its African rhythms. Soulages’ abstraction leant itself to a range of interpretations.

In 1979 Soulages devised his first outrenoir paintings, displayed in a show at the Pompidou Centre, where many of the works were hung from wires in the centre of the room. This coup de théâtre was followed by public commissions, notably in 1986 the 104 stained glass windows for the Romanesque abbey of Sainte-Foy at Conques, 40 kilometres from his birthplace. Delicately complementing the hues of the surrounding stone, they fulfilled Soulages’ aim of creating a diffuse light: “A living light, you might say, held in the glass itself.”

The project was so engrossing that in 1992-94 Soulages stopped painting altogether as he completed the windows. By the end of the decade, however, he had returned to the black monumental canvases that were to dominate the rest of his career. In 2009-10 he had a second retrospective at the Pompidou Centre, which was the museum’s largest exhibition of a living artist, attracting half a million visitors. The retrospective Soulages at the Louvre marked his 100th birthday.

Perhaps even more significant were the new permanent collections of Soulages’ work. A section devoted to his art was added to the Musée Fabre in Montpellier for its reopening in 2007, and by 2012 he had donated nearly 500 paintings to the Soulages Museum in his beloved birthplace, Rodez.

He is survived by Colette.